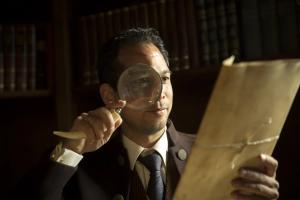 The Unsolved Cases of Charlotte Sharp

The game’s afoot! A 19th Century Mystery Game inspired by the popular 1864 book “The Female Detective” has become a captivating Kickstarter campaign.

NEW YORK, NEW YORK, UNITED STATES, June 8, 2021 /EINPresswire.com/ — Sherlock Holmes may be the most famous Victorian detective, but real-life female investigators were a force to be reckoned with.

Described as “private inquiry agents,” women were hired by politicians, individuals, and even Scotland Yard to make investigative inquiries and examine criminal activity. These exciting enchanters, both in books and in the real world, were full of mysterious magic.

Inspired by the popular 1864 book “The Female Detective” by James Redding Ware, The Unsolved Cases of Charlotte Sharp is a collection of fiendish, digital mysteries brought to you by puzzle master Jachin Letwory, creator of two wildly successful treasure hunt escape games, including The VOC Treasure – https://www.kickstarter.com/projects/moderntreasurehunt/the-voc-treasure-at-home-mystery, and Mysteries of Alchemy – https://www.kickstarter.com/projects/moderntreasurehunt/mysteries-of-alchemy-a-search-for-the-philosophers-stone.

Together with storyteller Anke Staffers, this darkly dynamic duo has created a capital Kickstarter campaign to bring The Unsolved Cases of Charlotte Sharp, a mighty digital mystery game, to life.

Over one hundred and eighteen backers from around the world have vied to become a part of this potent pledge project by making generous donations. With an effort to raise a sum of $3,650, Letwory’s Kickstarter has amassed $7,592 to date, offering a wide range of rewards with only six days remaining.

Launched in 2009, Kickstarter is the world’s largest crowdfunding platform for creative funding pursuits. Without it, projects that have revolutionized the globe would have remained nothing more than aspirations.

Before crowdfunding, it was challenging for excited entrepreneurs to launch their best and brightest business ventures. Kickstarter leveled the playing field in its advent, making it possible for bold and brilliant creative projects like The Unsolved Cases of Charlotte Sharp to find the funding it needs to get off the ground.

In Letwory’s riveting game The Unsolved Cases of Charlotte Sharp, Detective Sharp has conducted a thorough investigation and compiled a complete dossier of evidence, including witness statements, reports, and other clues.

In each case, Charlotte Sharp misses some final, vital clues and is desperate for a partner who can help solve these cases.

That partner is you.

Do you have the detective skills necessary to unravel these unsolved cases which take place in the latter part of the nineteenth century? Can you close the conditions she was forced to leave open?

All you have is the evidence Detective Sharp has uncovered with the help of her office clerk, Harry, and the clock is ticking.

Introduction
For centuries, the name Charlotte Sharp has shaken the established order as a meddler, critic, and advocate for truth and justice. The Netherlands has only had an established police force since the 1880s, and Detective Sharp has been one step ahead ever since. Yet, she never received recognition for her actions principally because she sought justice in secret.

This didn’t stop Charlotte from being a friend to the needy.

Through her dogged, persistent, and sharp mind and eye, she helped free the unjustly incarcerated. As a result, the police grew to respect her, and yet, the police feared her.

How it works
For each dossier, players receive a login for the game’s dashboard. After logging onto the dashboard, interactive videos, 360-degree panoramas, and pictures will dictate the game’s flow. The information you gather can be examined at any given moment, and some of the items will be printable (optional). The dashboard works on a desktop or laptop and is easy to use, no matter your computer skills.

Collector’s Edition
Players who crave a physical platform can obtain a limited collector’s edition. Members hold documents to examine at their leisure within the digital version.

Stretch Goals
Because they are true treasures, stretch goals are worth reaching. After hitting € 10000,- every backer who pledged €15- or more gains access to an online treasure hunt game – “Junior Treasure Hunter” (Not a kids game, although the title seems to indicate it might be. In this game, players try to become a Junior Treasure Hunter at a Treasure Hunting Company). A week after the campaign, members can play to prepare for “The Unsolved Cases of Charlotte Sharp” and start the fun early.

The second, third and fourth stretch goals are even better; for the same amount pledged, backers could receive different games. Only backers who pledged €15- or more get access to these stretch goals once unlocked!

The story about the game:
In the 19th century, women’s rights did not exist. The character of Charlotte Sharp is revered for breaking tradition as a strong and independent woman. Each new “season” jumps years ahead, enabling exciting taboo story devices such as mixed marriage, homosexuality, and transgenderism.

To pledge Kickstarter support to bring The Unsolved Cases of Charlotte Sharp to life, visit
https://www.kickstarter.com/projects/moderntreasurehunt/the-unsolved-cases-of-charlotte-sharp?ref=31l290

Jachin Letwory
Jachin Letwory operates a respected guitar school from within a converted garage in his home in the Netherlands (Zwolle), where he lives with his wife and two sons. In 2017, he began a side job curating outdoor treasure hunts, which sparked an idea for his first escape game box entitled The VOC Treasure. The son of a mixed marriage, Letwory’s mother, hails from The Netherlands, and his father, was a Malukan refugee from Papua New Guinea. As a child, Letwory was born with a benign head tumor, resulting in Aphantasia (https://www.nytimes.com/2020/07/15/well/mind/aphantasia-mental-images.html). However, his condition never stopped him from producing wildly creative enterprises which continue to capture evocative invention and mystical imagination.