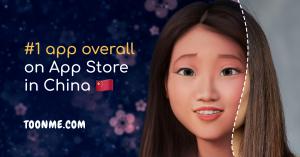 Overtaking TikTok in China? ToonMe just did it! 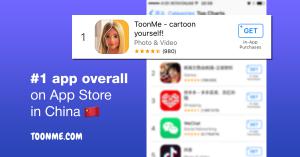 ToonMe app has become #1 on Chinese App Store this weekend

It sounds almost unbelievable, but since this weekend ToonMe is the #1 app overall on the App Store in China, leaving behind such giants as TikTok and WeChat!

TORTOLA, BVI, April 28, 2021 /EINPresswire.com/ — It sounds almost unbelievable, but since this weekend ToonMe (a popular mobile app that turns people into cartoon characters) is the #1 app overall on the App Store in China! It also seems quite extraordinary that it has left behind undisputed leaders of mobile apps in China such as WeChat and TikTok.

Interestingly enough, ToonMe is also the only non-Chinese app that got into the Chinese top 100. If we dare to say that the app market in China is ‘all Chinese’ to us, it’s not just a figure of speech, as it has always been dominated by Chinese apps.

All that said, we are incredibly happy that we’ve won the hearts of Chinese mobile users! According to our source in China, TikTok (抖音) has been one of the key driving forces for this viral effect, with over 70 million #toonme creatives posted to this social network. And that feels so good because our filters make everyone look simply TOONtastic!

By the way, it’s not the first victory in the Asian Market for ToonMe – just several weeks ago it took over Japan, having made it to a number of popular local TV shows!