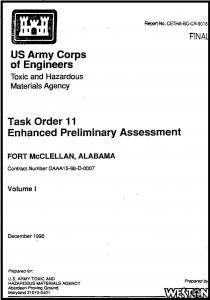 Engineers report cover that holds half of the ten exposure pathway reports used by the McClellan Vets as proof of their toxic exposures. 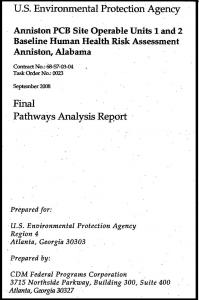 An EPA report cover that holds the exposure pathway report for the Monsanto Factory spill covering McClellan Vets as “commercial visitors” in the declared exposure populations.

Veterans who are inside the system liken the VA & Capitol Hill Committees to enablers of a modern-day Bataan Death March.

ALBANY, NEW YORK, USA, April 12, 2021 /EINPresswire.com/ — The Dept. of Veterans Affairs agency is running a corrupt and incompetent disability claims process for environmental toxic exposure veterans who passed through verified contamination sites while they were on military active duty. This is part of the revelations that insider veterans are making to get the word out to the public about what’s really going on from inside the system. The program is more commonly known as the VA Compensation and Pension benefit. It’s run exclusively by non-medical administrators at the Veterans Benefits Administration and is not under the department oversight of the Veterans Health Administration where the doctors are.

The national medical patient group known as Toxic Exposure Army Veterans of Fort McClellan, have been on the receiving end of the VA’s corrupted practices since the year 2003. They are still in processing limbo and are unresolved inside the program.
The group argues the entire process that VA is using for veterans to identify themselves with as hazardous exposures cases, is primarily rooted in two separate illegal practices. One malpractice they have identified is the use of patient abuse tactics from inside the claims process by rogue and harassing raters. Current VA regulatory laws only prohibits the schemes of patient abuse while veterans are inpatients at the VA Hospitals. For them, it’s open season for crimes from these rogue raters.

The second malpractice is for the raters and exam doctors to use the claims process to impose practices of discrimination on the basis of the disabilities and handicaps of the filing veterans. They say the VA violates its own protection laws which are set up to oppose the use of discrimination practices to block them from accessing federal programs. This can include illegal patient lockouts from their military benefits and an organized refusal by the VA to even process the application forms filed by toxic exposure patient groups. The veterans say there is no specific law that empowers the VA to refuse to process their cases correctly, or to deny their benefits wholesale based on the simple fact they are medically-matched to the known toxic sources at their military service site.

Toxic exposures in the veteran’s arena, are the outcome of an engineering declaration made in site reports at the time an environmental contamination zone is discovered. Environmental engineers are a licensed workforce that answers exclusively to the data measurement standards which are set forth by the Environmental Protection Agency on any given day. The veterans argue that the VA has no legal standing to argue with or to refuse to apply the environmental declarations that are made by military or civilian engineers to their VA disability cases.

Toxic exposure evidencing for certain population groups, are found in the engineering declarations as three different formats. The veterans argue there is no one at the VA who is competent enough to read the engineering papers to locate the three primary pages of evidence that they have to use to establish their disability claims with. It’s an odd processing obstacle for them to first have to find and submit the evidence pages on their own as disadvantaged medical patients, and then to have to submit the pages to a rater workforce who is academically inadequate to even apply them to the veteran’s cases.

The three basic papers of evidence that verifies and proves certain military veterans were exposed to toxic sources at a contamination zone are known. But the veterans argue that readers do have to be skilled enough in locating the papers, which are often embedded within hundreds of other pages holding dismissable topics. One format is called a Hazard Rating Scale or (HRS). A Hazard Rating Scale is a math scoring formula which is calculated against the numerical threshold limits that are established by either the EPA Superfund or National Priorities List (NPL) programs. The second format for evidencing is called an exposure pathway report. The toxic spill site names out the pathways of air, water, or soil as the routes of toxic exposures, and then names out the estimated exposure population groups that are most likely to show health risk developments. The third format for evidencing is the remedial cleanup actions that are ordered by state or federal environmental agencies. Any one of these formats, or combinations of them from the three choices, are the body of evidence used by the industry to establish toxic exposures to medical patients.

The McClellan Vets group is holding all three collections of engineering papers to evidence their group case with before the VA. They say it’s the VA who has been using wrong engineering papers that are deliberately selected to support a false narrative to suggest that nothing toxic was found at the Army base or that soldiers were not exposed to anything toxic.

The veterans also say that the VA disability claims process is overrun with conflicted filing forms, rater incompetence, rater hate-crimes and discriminatory practices, exam doctor falsifications of DBQ papers, and meddling civilians who dominate the legislative committees where the veterans have to go for remedy bills for each groups personal VA crisis. They point to the new false narrative coming out from the Twitter accounts of committees right now that suggests the veterans have to either be deployed or in combat service in order to be recognized at the VA for toxic exposure claims. This is widely known to be a lie in the veteran’s arena where the statutory Basic Entitlement laws covers both war era and peacetime era veterans for their health claims.

The McClellan Vets feel that the only real solution to the layers of corruption at the VA claims process is for the Dept. of Justice, the FBI, and the U.S. Attorney’s Office to form a Task Force to collect statements from the veterans for the review of possible interagency prosecutions.