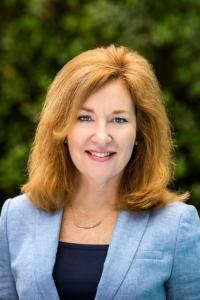 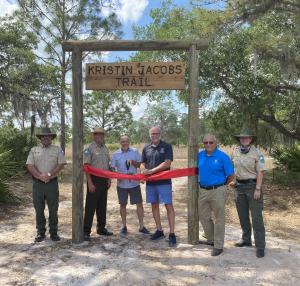 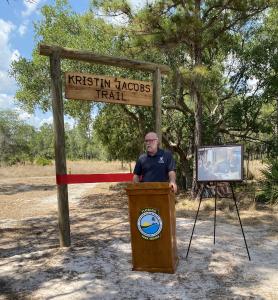 This trail is a fitting tribute to ensure her legacy continues

It is perfectly fitting that a trail in her honor sits at the headwaters of the Everglades which she spent so much time fighting for.”
— Steve Vancore

The trail opening, on the anniversary of her death, also included a celebration of her life.

“We were privileged to have had such a dynamic and energetic board member. She will be greatly missed but this trail is a fitting tribute to ensure her legacy continues”, said Foundation President Gil Ziffer.

“As a Broward County commissioner, mayor and state representative, Kristin Jacobs devoted herself to the preservation of Florida’s natural wonders. She fought for our environment and pushed to ensure public access to Florida’s lands and waters,” he said.

“Kristin enjoyed Lake Kissimmee State Park as a camper, hiker, and cyclist. Standing here, you are connected to the headwaters of the Everglades ecosystem, an irreplaceable resource that she worked to protect for generations to come,” he added.

“Kristin loved this park – spent many summers with her children there – and loved this trail. It is perfectly fitting that a trail in her honor sits at the headwaters of the Everglades which she spent so much time fighting for. On behalf of her family, a big thank you to both the Foundation and the State Park Service for their spirit and generosity in making this happen”, Steve Vancore, Kristin’s significant other.

For 16 years, Kristin served as Broward County Commissioner and was twice chosen to serve as Mayor. In 2011, Kristin was selected to serve as Chair of the White House National Ocean Council’s Governance Coordinating Committee, which advised President Obama on local government perspectives on ocean policy. 2013 found Jacobs chosen among a select few to join President Obama at Georgetown University as he unveiled the nation’s first Climate Action Plan, and that same year President Obama appointed her to the Local and Tribal Leaders Task Force on Climate Preparedness and Resilience. Kristin was twice invited to testify before Congress on the Clean Water Act and Climate Change issues. She joined the Florida State Parks Foundation as a board director in 2018.

The Foundation, founded in 1993 as Friends of Florida State Parks and renamed in 2018, is a 501(c)(3) nonprofit corporation whose mission is to support and help sustain the Florida Park Service, its 175 award-winning parks and trails, local Friends groups and more than 20,000 park volunteers.

It does this through programs that preserve and protect state parks, educate visitors about the value of state parks, encourage community engagement and active use of state parks, and advocacy. The volunteer Board of Directors represents private and public sectors as well as local and statewide interests.