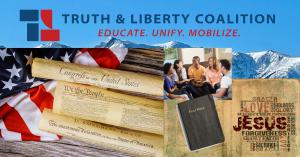 Educating people of faith to engage in public affairs is important for maintaining biblical values in our society.

Under this program, the Pentagon is now teaching our troops that they are fighting to defend a systemically racist country.”
— Richard Harris, Executive Director, Truth & Liberty Coalition.

WOODLAND PARK, COLORADO, UNITED STATES, April 12, 2021 /EINPresswire.com/ — The U.S. Defense Department under the Biden Administration has embarked on a program to eliminate so-called ‘extremism’ from its ranks.

One of the program’s recent events included the decision to teach “critical race theory” to U.S. troops. “Critical race theory is a Marxist ideology that goes against everything America stands for,” said Richard Harris, Executive Director, Truth & Liberty Coalition.

“Moreover,” Harris said, “under this program, the Pentagon is now teaching our troops that they are fighting to defend a systemically racist country.”

In a virtual meeting for “all hands” last month, the agenda—obtained by The Daily Signal—counted the scandal-plagued Southern Poverty Law Center as a credible resource alongside the Department of Homeland Security and the University of Maryland.

The Southern Poverty Law Center is a left-wing activist group known for labeling organizations it opposes as “hate groups,” according to The Daily Signal news report.

The Biden administration’s new initiative includes a ‘recommended’ reading list for service members. Authors included on the Pentagon’s list include radical voices such as Ibram X. Kendi and Ta-Nehisi Coates.

“Driven by identity politics and leftist ideology, the Biden-Harris Administration is making drastic changes to the United States military that risk diverting its focus away from its primary responsibilities,” Harris said.

Established in 2019 by Andrew Wommack, founder, Andrew Wommack Ministries and other Christian leaders, the Truth & Liberty Coalition offers a variety of programs, tools and resources to be able to focus on conservatism in the United States.

“Educating people of faith to engage in public affairs is important for maintaining biblical values in our society,” said Harris.

“We are literally fighting for the soul of our country, and in this case, the military,” Harris said.

“We find often that churchgoers and pastors don’t know where to start,” said Harris. “Our goal is to educate audiences and connect with resources and groups across the nation to help them impact their own spheres of influence.”

In another recent example where the ‘soul” of the military is being attacked, Secretary of Defense Lloyd Austin – a retired four-star general – called for a 60-day standdown of the nation’s military to focus on diversity and inclusion initiatives.

“I’ve never seen or heard of anything like that,” said Gen. Jerry Boykin on a recent Truth & Liberty Coalition livecast. “Our military is supposed to be ready to go at all times, on a moment’s notice, and respond to threats to this nation.”

The Secretary ordered the standdown to address “extremism” in the military, supposedly in response to protests at the United States Capitol on Jan. 6. Servicepeople were subjected to training about extremism, but according to Gen. Boykin, a recent report indicated that the concept was undefined and left purposefully vague.

Underlying the whole exercise was again the concept of critical race theory, often used as a tool of division by the radical left. According to Gen. Boykin, critical race theory takes a page out of the Marxist playbook in promoting its premise that all white people are racist and must be re-educated.

“If you think about what Karl Marx [the father of socialism and communism] said, he said you have the bourgeoisie and the proletariat, and you got to get them to fight each other and bring about a revolution – and then we level the playing field,” said Gen. Boykin. “Well, now, it’s not economic classes; it’s race.”

“If we live our lives and dedicate our country to truth, to love, and to God, we will be a part of something much stronger and much more enduring than any negative power here on Earth that we are currently witnessing in the military,” Harris said.

About the Truth & Liberty Coalition:
Visit the Resource Center for great practical resources for standing for truth in the public square and learn about becoming a member.

About Andrew Wommack:
Andrew Wommack is president and founder of the Truth & Liberty Coalition, Andrew Wommack Ministries, and Charis Bible College. He and other Christian leaders established the Truth & Liberty Coalition to educate, unify, and mobilize believers in Jesus Christ to affect the reformation of nations through the seven mountains of cultural influence. Since 1968, he has taught God’s Word with clarity and simplicity, emphasizing the unconditional love and grace of God. His vision is to spread the Gospel as far and deep as possible through his daily Gospel Truth television and radio programs, broadcast nationally and internationally, as well as through GospelTruth.TV, his internet television network.

Richard served for several years as the legal counsel for the Oklahoma Conservative Political Action Committee.