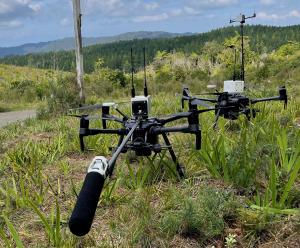 The audio system is two way so rescuers can not only hear the missing people call for help, but also ask questions about injuries, other people and their location, and advise of rescue actions.”
— Shaun Edlin

AUCKLAND, NEW ZEALAND, March 25, 2021 /EINPresswire.com/ — Imagine being lost in the bush and suddenly you hear a drone flying over top.

You cannot see the drone due to the forest and you yell for help but it’s pointless… drones can’t relay your voice.

Dotterel Technologies’ development of world leading aerial audio means rescuers will be able to have two-way conversations with the person or people they are seeking.

Shaun Edlin, CEO of Dotterel, proved the point to a multi-agency search and rescue exercise in the Hunua Ranges, Auckland, New Zealand recently. He and his team flew a drone to find a “lost” person and proved it could be an effective way of providing two-way communications in the bush.

Dotterel has found a way to put its unique, highly directional microphone array and processor on drones so that it can capture audio while rejecting drone propellor noise and other loud environmental noise.

“The audio system is two way so that the rescuers can not only hear the missing people call for help but also ask questions about injuries, other people and their location and advise of rescue actions,” Edlin says.

“Drones are used frequently in public safety situations around the world, like search and rescue and for improving situational awareness. We are being approached by many public safety groups globally as word spreads about our unique audio capability. Of particular interest is using drones as remote communication tools in Search and Rescue, and to help de-escalate situations in long range negotiations while keeping operational teams safe.”

Auckland search and rescue (SAR) leader Brandon McCarthy says the audio addition to drones will make them an even more valuable tool in the SAR kit.

“It wasn’t hard to see from Dotterel’s demonstration that the audio capability could be used to quickly gather critical information from missing people, or to pick up their voices when it flies across locations. This is important, as many missing people are found by rescuers listening for voice appeal in hard-to-reach locations and the ability to quickly extend our hearing range is of high value.”

Edlin says the Aerial Audio solution will help save lives and reduce risk for both civilians and operational public service teams.