UN Resolution: Defeat for Sri Lanka but No Justice for Tamils – TGTE

UN Resolution: Defeat for Sri Lanka but No Justice for Tamils – TGTE 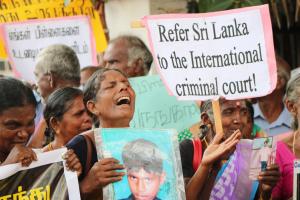 Tamil Mothers of the Disappered

“For Tamils Resolution is a step backwards. The 2015 Resolution called for the participation of foreign judges, the current resolution leaves it to Sri Lanka”

Not referring Sri Lanka to Int’l Criminal Court will embolden Sri Lanka to commit more atrocity crimes against Tamil people without any hesitation, knowing well that they will not have to face justice”
— Transnational Government of Tamil Eelam (TGTE)

The Resolution had the support of 22 countries, 11 countries opposed the resolution and 14 Countries, including India, abstained from voting. The abstention of Japan which traditionally supports Sri Lanka is noteworthy.

This is a diplomatic defeat for Sri Lanka in the international arena in recent times. In the past it has skilfully used the “War on Terror ” bogey and employed duplicitous tactics – such as demonstrated by its co-sponsorship of HRC Resolution 30/1 in 2015 which it never implemented while successfully hoodwinking the international community.

Earlier this year, the present UN High Commissioner for Human Rights, along with 4 former High Commissioners, 13 former UN Special Rapporteurs who had visited Sri Lanka, and three members of the Secretary-General’s Panel of Experts on Sri Lanka, called for the referral of Sri Lanka to the International Criminal Court (ICC). The TGTE thanks them for their judicious work.

The TGTE has been calling for Referral of Sri Lanka to the ICC since 2011. During the current session, this call became one of the main positions of the Tamil Political leadership, Tamil Civil Society, Tamil Religious leaders, Tamil Diaspora and the International NGOs. It is noteworthy that, following the passage of the Resolution, Amnesty International indicated that “the member states using the resolution as a basis for …a possible referral to the International Criminal Court”.

It must be stated here that Sri Lanka’s diplomatic defeat does not necessarily translate into justice for Tamils as the UNHRC Resolution leaves accountability to the Sri Lankan state itself.

From a historical perspective, the Resolution must be seen by Tamils as a step backwards. The 2015 Resolution, for instance, called for the participation of Commonwealth and foreign judges, whereas the current resolution leaves accountability exclusively to a domestic mechanism. With respect to the Prevention of Terrorism Act (PTA), which is characterized as an ugly blot in the statute books of any civilized nation, the word “repeal ” which was in the 2015 Resolution, has disappeared from the latest one.

What is also perplexing to us is that, despite the statement by the Deputy High Commissioner for Human Rights, Mehr Khan Williams, that they already had the needed evidence in their possession, there is a clause in the new Resolution calling for… “the Office of the High Commissioner to collect, consolidate, analyse, preserve information and evidence…”. This is a hollow statement which appears to have been included to placate the Tamil victims. There are at present three comprehensive UN reports, namely, the UN Expert Panel Report, the Internal Review Report (aka PETRIE Report) and the OHCHR investigation on Sri Lanka (OISL), all of which clearly point to culpability in international crimes at the highest levels of the Sri Lankan State.

There is already an explicit call made by the UN High Commissioner for Human Rights, Michelle Bachelet, urging member countries to take action to refer Sri Lanka to the ICC and exercise universal jurisdiction/extra territorial jurisdiction. What is needed for Sri Lanka’s referral to the ICC is not another action plan but political will on the part of member states.

The fact that Sri Lanka has not been referred to the ICC will only serve to embolden Sri Lankan political leaders and their Security Forces leaders to commit more atrocity crimes against Tamil people without any hesitation, knowing well that they will not have to face justice. International community, especially the Core group countries, should seriously consider this risk Tamil people face today and take appropriate steps to protect Tamils by creating international protection mechanisms.

The new UNHRC Resolution goes to demonstrate the challenges faced by non-state nations in obtaining justice ever in forums controlled by formally recognised states. Despite the Right to Self Determination being a fundamental principle, adopted by the United Nations and the world community in the post-Second World War period, its judicious application has been blocked routinely by existing nation states.

Worse still is the fact that nation states do not hesitate to carry out terrible crimes such as genocide and crimes against humanity, reminiscent of the Nazi horrors, under the guise of safeguarding their ‘sovereignty’ and ‘territorial integrity’. Global powers which maintain the rhetoric of human rights and democracy in words continue to turn a blind eye to these crimes when it comes to corresponding deeds on the ground, very often to suit their own geopolitical and economic interests.

At this critical juncture, the TGTE must boldly seek new spaces and new forums to pursue justice. We will return to our earlier initiative of “Victims Driven International Justice” to enable the victims to set up creative other forums to pursue justice. In this regard, we request the UN High Commissioner for Human Rights to share the evidence in her possession with the victims concerned so that they have a certain closure and pursue possible legal actions on their own independent of the UN.

The TGTE is also pursuing legislative efforts in democratic countries to bring the necessary amendments to prevent ‘sovereign immunity’ being adopted as the rationale for offering protection to the states accused of genocide, crimes against humanity and war crimes, through civil proceedings in these states. This initiative will enable victims themselves to use the judicial forums available in the countries where they live to sue the Sri Lankan state for damages. The TGTE calls upon the Tamil diaspora to build coalitions with mainstream civil society and approach host governments to develop strategies to mobilize support for the second initiative above.

We shall continue our quest for accountability in all existing forums such as the ICC, International Court of Justice (ICJ) and the domestic judicial forums of civilized countries under universal jurisdiction, while also seeking new forums where we can bring charges against the Sri Lankan State itself. “Death by a thousand cuts”.