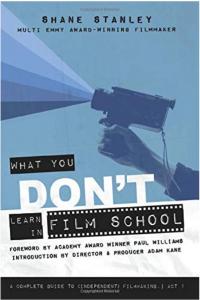 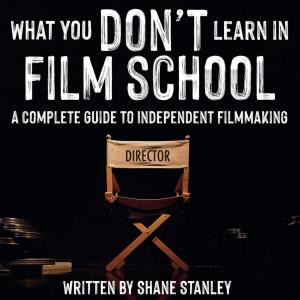 What You Don’t Learn In Film School Audiobook Cover Image

I wrote this book in layman’s terms for all the other dreamers and creatives like me out there; hopefully,, they can avoid some of the pitfalls, bumps, and bruises I suffered over the last 30 years!”
— Shane Stanley

HOLLYWOOD, CA, UNITED STATES , March 23, 2021 /EINPresswire.com/ — The highly endorsed and praised, definitive industry insider’s professional guide how to create an indie film, ‘What You Don’t Learn In Film School,’ is now also available in audiobook format, published by Indie Film Hustle Books and narrated by actor Ted Jonas. The paperback can be found at online retailers including Amazon and Barnes & Noble, and the audiobook on outlets including Audible and Amazon. The release is in conjunction with author and filmmaker Shane Stanley’s new series of how-to webinars that will be available at the Indie Film Hustle Academy in April.

‘What You Don’t Learn In Film School’ covers indie filmmaking from concept to delivery and has landed on required reading lists at several universities across the country. It is endorsed by some of the most respected names in Hollywood, including Producer Neal H. Moritz (Fast & Furious, S.W.A.T., 21 and 22 Jump Street), Jeff Sagansky, (CEO Platinum Eagle Acquisition Corporation, Former President of Sony Entertainment and CBS Entertainment), Jane Seymour (2-time Golden Globe® and Emmy® Award-winning actress and producer, Founder of The Open Hearts Foundation), and Paul Williams (Oscar®, Golden Globe®, Grammy® Award winner, Hall of Fame songwriter). Readers will find a detailed, no holds barred examination of making movies from ‘concept to delivery’ by the “Go-To No Budget Guy,” Stanley.

The primer covers the often ignored nitty-gritty inevitabilities including:

These and more tear the lid off the many myths and often glossed over details surrounding raising money and securing financing, timing, legalities, the seemingly unattainable sales agents, and today’s innumerable distribution platforms for indie films.

Stanley shares, “I have been fortunate to teach at some of the most respected film schools in this country. One thing that is shockingly consistent is how little students are taught about the day-to-day realities of actual filmmaking or how to become steady earners in this business. No blame on the esteemed educators or their curriculum, it is simply the fact that one cannot emulate real-life circumstances in a classroom. So, I wrote this book, broke it all down in layman’s terms, for all the other dreamers and creatives like me out there; hopefully, they can avoid some of the pitfalls, bumps, and bruises I suffered over the last 30 years.”

In April, Stanley will be presenting a new series of how-to webinars in for Indie Film Hustle’s Online Film Academy covering the book and additional content including, Producing A Film During COVID, Casting Your Film, and How To Get The Biggest Bang For Your Budget. Indie Film Hustle was created by filmmaker and entrepreneur Alex Ferrari to “share the truth on how to make it as a filmmaker in this crazy and sometimes brutal business.” The portal has hundreds of hours of online courses, workshops & seminars taught by some of the film industry’s greatest minds and practitioners.

Shane Stanley is a multi-Emmy® Award-winning filmmaker and author who started his career as a childhood actor and learned ‘the biz’ under the tutelage of his father, famed Director, Lee Stanley. He has worked with and been lauded by some of the biggest names in Hollywood. His first major film success was producing “Gridiron Gang,” starring Dwayne ‘The Rock’ Johnson, a reincarnation of the television series he produced with his father, The Desperate Passage Series. He has produced, written, and directed a myriad of music videos, national commercial campaigns, and independent films that have garnered dozens of awards. His new book, ‘What You Don’t Learn in Film School’ is on required reading lists at several universities and is endorsed by some of the most respected names in entertainment. He serves on several advisory boards for film schools and is a contributing columnist and speaker for top publications in the indie film world. He and his wife live in Los Angeles.