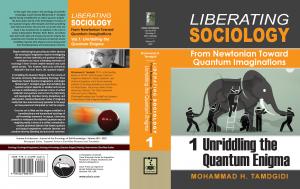 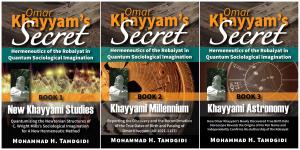 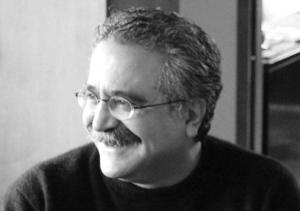 As the pandemic shows, to unriddle the quantum enigma and embrace quantum ways of understanding and solving problems is a matter of life and death for humanity.

The quantum enigma is a result of our dualistic, ideologically constructed and habitually leftover (at times hypnotically as in double-slit experiments) classical Newtonian ways of imagining reality.”
— Sociologist and Author, Mohammad H. Tamdgidi

BOSTON, MASSACHUSETTS, UNITED STATES, April 27, 2021 /EINPresswire.com/ — In a new twelve-book series on “Omar Khayyam’s Secret,” the first three books of which will be simultaneously published by OKCIR (Omar Khayyam Center for Integrative Research) on June 1, 2021, the transdisciplinary sociologist Mohammad H. Tamdgidi will offer evidence for the practical fruitfulness of his solution to the quantum enigma as reported in January 2020 in his book, Liberating Sociology: From Newtonian Toward Quantum Imaginations: Volume 1: Unriddling the Quantum Enigma.

“The basic, most consequential, quantum notion pursued in the new Khayyami studies,” Tamdgidi states, “is that any part of Khayyam’s works, such as even a single quatrain composed by him, existed simultaneously — not in a ‘complementary’ or dualistic way, but at once — also in a spread-out mode in his entire body of work.” “So, to treat Khayyam’s works’ parts in a chunky, Newtonian, way will never bear fruit if treated as ‘billiard balls,’ themselves misconceived to exist apart from one another, as if they could be understood separately from one another and from the players and other possible observers as far as that play is concerned,” Tamdgidi adds.

He further notes, “this means that if Khayyam wrote any quatrains, even if we have lost trace of it due to various historical, natural, or archival reasons, we should be able to find it still existing in a spread-out mode, as a wave of intellective and creative insight, across the body of his undeniably authored works as a whole.” Tamdgidi states that the details of how this basic quantum insight revolutionizes the hermeneutic method, and offers fruitful results, such as the historically unprecedented findings to be reported in Tamdgidi’s new series on Omar Khayyam, can be best appreciated by reading the series carefully.

Tamdgidi’s 2020 book “Unriddling the Quantum Enigma,” opened the lid of the Schrödinger’s cat box of the quantum enigma after decades, finding something both odd and familiar: Not only the cat was both alive and dead, it had morphed into an elephant in the room in whose interpretation Einstein, Bohr, Bohm, and others were each both right and wrong because the enigma had acquired both localized and spread-out features whose unriddling required both physics and sociology amid both transdisciplinary and transcultural contexts.

According to the author, “the famous light-chasing thought experiment Albert Einstein self-reportedly made when young in 1895 and again in 1905, inspiring his theorizations of relativity, contained an historical asynchronicity that has not been noticed before and points to how the quantum enigma was seeded.”

“The problem,” Tamdgidi argued, “is that the 1905 Einstein writing his first miracle-year paper on light, where his notion of its wave-particle duality was reported, never asked whether the light he was imaginally chasing in 1905 or even back in 1895 was a particle or a wave. Instead, he referred to light as a beam at the time and also in his retrospective reporting of his 1895 youthful thought experiment, even though in 1895 light was still undisputedly considered to be a wave and not a particle moving as a beam.”

“Had he written his third 1905 miracle-year paper on relativity first,” the author quipped ironically, “Einstein may have found a relativistic solution to his puzzle about light’s duality that seeded the quantum enigma.”

Tamdgidi continued, “the light beam Einstein imagined chasing was actually chasing him as well. In fact the bi-directionally waving beam in his reference frame was also at once a wave spreading out in all directions in its own reference frame.”

In the author’s view, Einstein’s notion of the wave-particle duality of light and its associated “complementarity principle” (later coined by Niels Bohr), and several other resulting notions, are false narratives—astonishing blunders in science in fact—despite the quantum theory being, rightly so, the most tested and confirmed scientific theory. This is because, according to Tamdgidi, the photon is always an electromagnetic wave and the question really is about how the same wave can at once be a localized object flashing by as a beam, and a spread out object moving in all directions like a ripple in the universal pond.

In fact, as odd as it sounds, but not so according to Einstein’s otherwise beautiful theorizations of relativity, Tamdgidi stated, we live inside what we consider to be tiny photons flashing by.

Tamdgidi concluded, “the reported findings of the book offering a relativistic solution to the quantum enigma may be significant for resolving other puzzles in physics, including its failures so far in unifying relativity and quantum field theory. The basic lesson here is that without a self-reflective, transdisciplinary, and transcultural approach across the natural and social sciences and the humanities, human problems (including those in science) will never be adequately solved. Consciousness inescapably matters—not in a spooky, but in a reasonable, way. The ‘theory of everything’ will never result from just pure physics.”

Mohammad H. (Behrooz) Tamdgidi, Ph.D., is the founding director and editor of OKCIR: Omar Khayyam Center for Integrative Research in Utopia, Mysticism, and Science (Utopystics) and its journal, “Human Architecture: Journal of the Sociology of Self-Knowledge” (ISSN: 1540-5699), which have served since 2002 to frame his independent research, pedagogical, and publishing initiatives. Tamdgidi holds a Ph.D. and M.A. in sociology in conjunction with a graduate certificate in Middle Eastern studies from Binghamton University (SUNY). He received his B.A. in architecture from U.C. Berkeley. He has previously also authored “Advancing Utopistics: The Three Component Parts and Errors of Marxism” (Routledge/Paradigm) and “Gurdjieff and Hypnosis: A Hermeneutic Study” (Palgrave Macmillan). He is a former associate professor of sociology specializing in social theory at UMass Boston and has taught sociology at SUNY-Binghamton and SUNY-Oneonta. Due to research commitments facing urgent deadlines, and preferences for written communication and privacy, the author can be reached only by email. All he wishes to share are done through his publications.